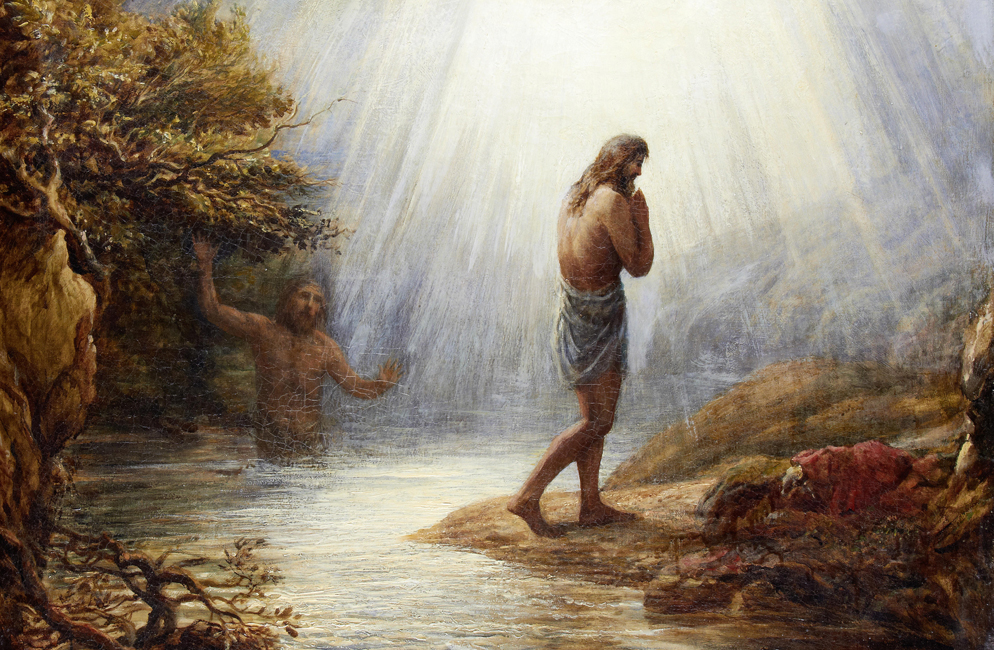 Jesus, though sinless, came to John to be baptized. Evangelist F. B. Meyer paints the singular scene and explains its Messiah-manifesting meaning.

The scripture for this Christ classic devotional is Matthew 3:13-17
Click here to read this passage in various translations

“John’s life, at this period, was an extraordinary one. By day he preached to the teeming crowds, or baptized them; by night he would sleep in some slight booth, or darksome cave. But the conviction grew always stronger in his soul, that the Messiah was near to come; and this conviction became a revelation. The Holy Spirit who filled him, taught him. He began to see the outlines of his Person and work.”

“It was this vision of the Sun before the sunrise, as he viewed it from the high peak of his own noble character, that induced in the herald his conspicuous and beautiful humility. He insisted that he was not worthy to perform the most menial service for Him whose advent he announced. ‘I am content,’ he said in effect, ‘to be a voice, raised for a moment to proclaim the King’. . . . ‘There cometh after me He that is mightier than I, the latchet of whose shoes I am not worthy to stoop down and unloose.'”

“John was not only humble in his self-estimate, but also in his modest appreciation of the results of his work. It was only transient and preparatory. It was given him to do; but it would soon be done. . . . He was the morning star ushering in the day, but destined to fade in the glory of ruddy dawn, flooding the eastern sky. But our impression of the sublime humility of this great soul will become deeper, as we consider that marvelous scene in which he first recognized the divine mission and claims of his kinsman, Jesus of Nazareth.”

Jesus at the Jordan

“For thirty years the Son of Man had been about his Father’s business in the ordinary routine of a village carpenter’s life. . . . The wild winds, as they careered over his village home, must have often borne to Him the wail of broken hearts, asking Him to hasten to their relief . . . entreating that He would come and heal them. But He waited still, his eye on the dial of the clock, till the time was fulfilled which had been fixed in the Eternal Council Chamber.”

“As soon, however, as the rumors of the Baptist’s ministry reached Him, and He knew that the porter had taken up his position at the door of the sheepfold, ready to admit the true Shepherd, He could hesitate no longer. . . . He must tear Himself away from Nazareth, home, and mother, and take the road which would end at Calvary. ‘Then cometh Jesus from Galilee to the Jordan unto John, to be baptized of him.'”

“Picture that remarkable scene. The arrowy stream, rushing down from the Lake of Galilee to the Dead Sea; the rugged banks; the shadowy forests; the erect, sinewy form of the Baptist; and Jesus of Nazareth. . . . At the sight of Him, note how the high look on the Baptist’s face lowers; how his figure stoops in involuntary obeisance; how the voice that was wont to ring out its messages in accents of uncompromising decision falters and trembles!”

“There was an indefinable majesty, a moral glory, a tender grace, an ineffable attractiveness in this Man, which was immediately appreciated by the greatest of woman-born, because of his own intrinsic nobility and greatness of soul. . . . He who had never quailed before monarch or people, directly he came in contact with Christ, cast the crown of his manhood at his feet, and shrank away. The eagle that had soared unhindered in mid-heaven seemed transfixed by a sudden dart, and fell suddenly, with a strange, low cry, at the feet of its Creator. ‘I have need to be baptized of Thee, and comest Thou to me?'”

“‘Suffer it to be so now: for thus it becometh us to fulfill all righteousness’ — with such words our Lord overruled the objections of his loyal and faithful Forerunner. This is the first recorded utterance of Christ, after a silence of more than twenty years; the first also of his public ministry: it demands our passing notice. He does not say, ‘I have need to be baptized of thee’; nor does He say, ‘Thou hast no need to be baptized of Me.’ He does not stay to explain . . . why a rite which confessed sin was required for one who was absolutely sinless. It is enough to appeal to the Baptist as his associate in a joint necessary act, becoming to them both . . . and claiming their common obedience.”

“In his baptism, our Lord acknowledged the divine authority of the Forerunner — as the last and greatest of the prophets, who was to close the Old Testament era, for ‘the law and the prophets prophesied until John’. . . . John’s baptism, moreover, was the inauguration of the Kingdom of Heaven. . . . The old system, which gave special privileges to the children of Abraham, was in the act of passing away, confessing that God could raise up children to Abraham from the stones at the water’s edge, and demanding that those who would enter the Kingdom must be born from above, of water and of the Spirit.”

“Christ said, in effect, ‘I, too, though King, obey the law of the Kingdom, and bow my head, that, by the same sign as the smallest of my subjects, I may pass forward to my throne’. . . . His baptism was his formal identification with our fallen and sinful race, though He knew no sin for Himself. . . . He was as pure as the bosom of God, from which He came; as pure as the fire that shone above them in the orb of day; as pure as the snows on Mount Hermon, rearing itself like a vision of clouds on the horizon. But He needed to be made sin, that we might be made the righteousness of God in Him.”

“‘It becometh us’ — I like that word, becometh. If the Divine Lord thought so much about what was becoming, surely we may. . . . ‘Need I perform that lowly act?’ It is becoming. ‘Need I renounce my liberty of action in that respect?’ It would be very becoming. And whenever some hesitant soul, timid and nervous to the last degree, dares to step out, and do what it believes to be the right thing because it is becoming, Jesus comes to it, enlinks his arm, and says, ‘Thou art not alone in this. Thou and I stand together here. It becomes us to fill up to its full measure all righteousness.'”

“‘Then he suffered Him.’ Some things we have to do for Christ, and some to bear for Him. Active virtues are great; but the passive ones are rarer and cost more, especially for strong natures like the Baptist’s. But, in all our human life, there is nothing more attractive than when a strong man yields to another, accepts a deeper interpretation of duty than he had perceived, and is prepared to set aside his strong convictions of propriety before the tender pleadings of a still, soft voice. Yield to Christ, dear heart. Suffer Him to have his way.”

Consecrated as the Christ

“It is not to be supposed that the designation of Jesus as the Christ was given to any but John. . . . As the Man of Nazareth emerged from the water, the sign for which John had been eagerly waiting and looking was granted. . . . The veil was rent to admit of the coming forth of the Divine Spirit, who seemed to descend in visible shape . . . and to alight on the head of the Holy One. . . . The Spirit not only came, but abode. Here was the miracle of miracles, that He should be willing to abide in any human temple, who for so many ages had wandered restlessly over the deluge of human sin.”

“The voice of God from heaven proclaimed that Jesus of Nazareth was his beloved Son, in whom He was well pleased. . . . How much that designation meant to Christ! It was his Pentecost, his consecration and dedication to his lifework; from thenceforth, in a new and special sense, the Spirit of the Lord was upon Him, and He was anointed to preach. But it was still more to the Baptist. He knew that his mission was nearly fulfilled, that his office was ended. He had opened the gate to the true Shepherd, and must now soon consign to Him all charge of the flock. Jesus must increase, while he decreased. He that was from heaven was above all; as for himself, he was of the earth, and spake of the earth. The Sun had risen, and the day-star began to wane.”

4 thoughts on “The Manifestation of the Messiah”