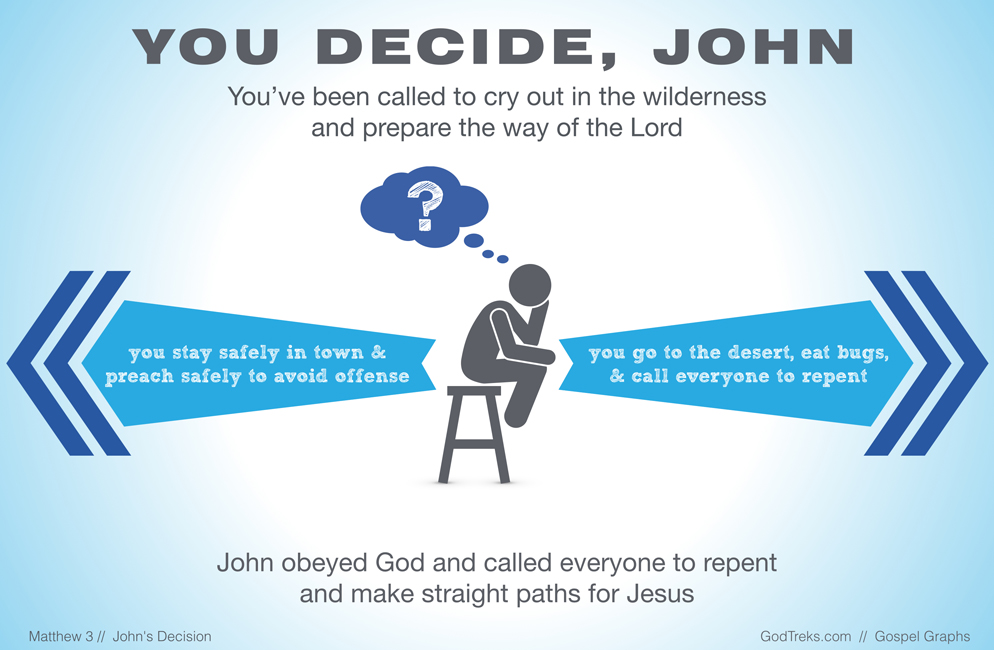 Before John was “John the Baptist,” he was just John. And John had to decide to give up everything to serve the Lord. No halfway plan would do.

This gospel graph is based on Matthew 3:1-12
Click here to read this passage in various translations

Imagine you’ve been given a very specific job to do — but it’s hard, very hard. You know your assignment. The Boss has been clear about what He wants you to do, and He’s given you all the tools you need to get the job done. He’s a good Boss. He never fails to reward His workers in the end. But doing this job for Him requires you to turn your back on nearly everything that people value. Your pay? Negligible. Working conditions? Abominable. Critics and challenges? Innumerable. Surely you’re tempted to look for a shortcut, for some way to do the job without sacrificing so much of yourself. Surely John was tempted.

Friends, to do the job he was called to do, John couldn’t shortcut God’s plan or obey halfway. He had to leave his way of life behind, go to the wilderness, and learn to depend on the Lord of Life. He had to call men and women to repent and bear fruit worthy of repentance, even though it was guaranteed to offend. When people flocked to him, he had to be ever-willing to point them not to himself and his ministry, but to the King and His coming kingdom. To be the Baptist, John had to go out, cry out, and prepare the Lord’s way at great cost to himself. He did, and so became the mighty man God created him to be.

2 thoughts on “John Becomes the Baptist”